Start a Wiki
Out To Lunch 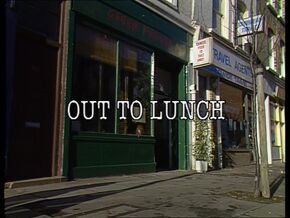 Out To Lunch is the 116th episode of The Bill.

P.C. Ramsey picks up D.I. Burnside and D.C.s Carver and Lines from an Italian restaurant. Before they get away, a woman called Mrs. Mancini approaches, complaining that there are people having sex in her car. One of them turns out to be her husband. The other woman wants Carver to get her clothes from the car. As the CID officers walk away talking about the other woman, they hear a scream and find her on the pavement. When Lines and Carver go up the stairs, they are pushed back down by a group of Italians who have a punch-up. They carry on the fight at the hospital, where Mr. Mancini ends up being attacked. The officers pull a practical joke on W.P.C. Brind and leave her in a mortuary drawer.

The characters of Mr. and Mrs. Mancini previously appeared in the episode "Trouble and Strife".

Retrieved from "https://thebill.fandom.com/wiki/Episode:Out_To_Lunch?oldid=34607"
Community content is available under CC-BY-SA unless otherwise noted.