Start a Wiki
Only A Bit of Thieving 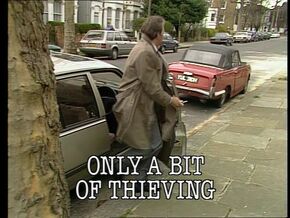 Written By
Chris Barlas
Produced By
Pat Sandys
Directed By
Brian Parker
Episode Chronology:
Previous
Free Wheel
Next
Communications
Only A Bit of Thieving is the 118th episode of The Bill.

D.S. Roach talks to a lady about a burglary. P.C. Melvin goes back with him that night. The teenage burglars return and, during a struggle one of them falls. His mate, who can't read, originally says Roach pushed him off but later retracts the statement.

Retrieved from "https://thebill.fandom.com/wiki/Episode:Only_A_Bit_of_Thieving?oldid=34611"
Community content is available under CC-BY-SA unless otherwise noted.