Start a Wiki
One For The Ladies 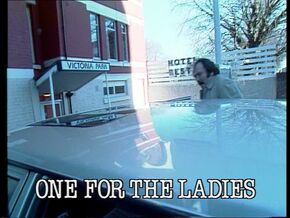 One For The Ladies is the 114th episode of The Bill.

D.C. Lines and D.S. Greig investigate the death of a resident in the Victoria Park Hotel. The hotel manager treats them like scum. The dead man was a Polish travelling tie salesman and died of a massive heart attack. P.C. Hollis pulls out seven different addresses for him from the files, and four wives turn up, separately. Hollis gets snapped at by Chief Supt. Brownlow, who won't let him take as much facility time as he needs to attend a Police Federation conference. Chief Insp. Conway wants to see P.C. Ramsey about a missing key ring and P.C. Stamp about accidents in the area car. W.P.C. Brind and P.C. Melvin are investigating locked fire doors at a bingo hall when they walk into an armed hold-up.

P.C. Stamp has been an Area Car (Class 1) driver for four years, during which time he has had eight POLACs (Police Accidents).

Retrieved from "https://thebill.fandom.com/wiki/Episode:One_For_The_Ladies?oldid=34603"
Community content is available under CC-BY-SA unless otherwise noted.