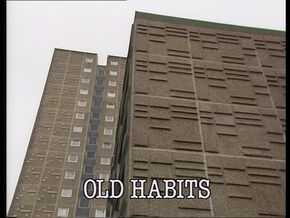 W.P.C. Brind is called to the house of an elderly lady, Mrs Lomax, who has just been robbed. The old lady is in such a state of shock, she attacks Brind and then suffers a heart attack and dies. It appears there's been a spate of burglaries against several old people from the Salisbury Day Centre, and Brind attends with Insp. Frazer to give a talk on crime prevention. D.C. Dashwood talks to the previous victims and comes up with a possible suspect: Terry Newton, a young lad doing community service at the centre. Terry's probation officer is obstructive to the investigation, and Dashwood is convinced they have their man. Terry admits to Brind that he thinks he knows who it was: Danny Harvey, the junkie newphew of one of the day centre members. D.S. Roach and Dashwood go to Maurice Harvey's flat - he's an old villain from the time of the Krays - and find that Danny has overdosed in the next room, but his uncle doesn't care.