Start a Wiki
Nothing But The Truth 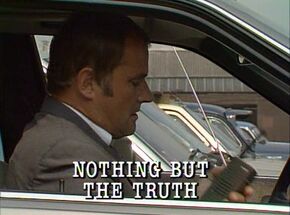 Written By
Arthur McKenzie
Directed By
Keith Washington
Episode Chronology:
Previous
Tulip
Next
It's Not Majorca
Nothing But The Truth is the 155th episode of The Bill

D.I. Burnside is having problems with the Crown Prosecution Service. He asks W.P.C. Brind to check a warrant on a man asked after by the C.P.S. D.C. Carver is having a hard time in CID. He is told not to wear his emotions on his sleeve. He is thinking about going back to uniform.

Retrieved from "https://thebill.fandom.com/wiki/Episode:Nothing_But_The_Truth?oldid=34682"
Community content is available under CC-BY-SA unless otherwise noted.