Start a Wiki
Not Without Cause 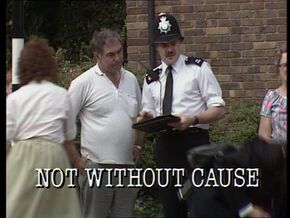 Not Without Cause is the 35th episode of The Bill

Sgt. Penny is asked by a landlord to talk to a lady on the top floor who is keeping cats. He is shot through the door after finding out his radio doesn't work. When Penny doesn't respond to radio calls, the station is worried about him and organises a search party. The landlord turns up at the station and talks to D.I. Galloway who doesn't make the connection.

Insp. Kite nicks four people for breach of peace that he caused.

A suspected poisoning of chocolate bars is traced to a supermarket.

Retrieved from "https://thebill.fandom.com/wiki/Episode:Not_Without_Cause?oldid=33337"
Community content is available under CC-BY-SA unless otherwise noted.