Start a Wiki
No Victim 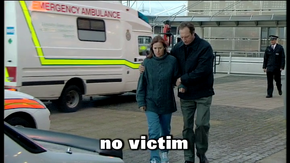 Written By
Andy Armitage
Directed By
Graeme Harper
Episode Chronology:
Previous
Upon Information Received
Next
Common Language
No Victim is the 1567th episode of The Bill.

P.C. Worrell and P.C. Quinnan attend to a woman threatening to jump off a bridge. She turns out to be Sarah Collins, the wife of DS Terry Collins from Stafford Row CID. Despite the doubts of some of her colleagues, Worrell is determined to pursue the matter as a domestic violence case. She convinces Sarah to make a statement and testify in court by telling Sarah of her own experience with domestic violence. The case is dismissed, however - Sarah becomes reluctant to testify, and there are doubts about her character. When Worrell goes to check on her at the Collins house, she finds that Sarah has murdered her husband. Meanwhile, Quinnan struggles to find the right time to tell his wife about his affair with P.C. Page.

Andrew Bicknell guest stars as Terry Collins in this episode.

Retrieved from "https://thebill.fandom.com/wiki/Episode:No_Victim?oldid=35405"
Community content is available under CC-BY-SA unless otherwise noted.