Start a Wiki
No Shelter 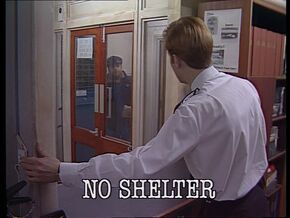 Written By
Julian Jones
Directed By
Terry Marcel
Episode Chronology:
Previous
One For The Ladies
Next
Out To Lunch

No Shelter is the 115th episode of The Bill.

An Italian lorry driver turns up at the front desk asking for directions to the Blackwall Tunnel. Sgt. Penny asks D.C. Carver to act as interpreter. W.P.C. Martella comes across an armed burglar trying to break into a wholefoods warehouse. He knocks her down and takes off, but wants to apologise to her at the end of her shift. P.C. Ramsey goes to a girlfriend's house to dry his trousers and is late responding to a call to a riot at a party, where two people are arrested. When the sister of one comes to Sun Hill to complain, D.C. Lines sends out a robot, with a policeman's hat on, to talk to her.

Retrieved from "https://thebill.fandom.com/wiki/Episode:No_Shelter?oldid=34605"
Community content is available under CC-BY-SA unless otherwise noted.