Start a Wiki
Mickey Would Have Wanted It 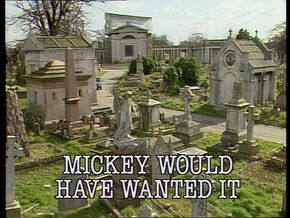 Written By
Kieran Prendiville
Directed By
Brian Farnham
Episode Chronology:
Previous
Suffocation Job
Next
Blood Ties
Mickey Would Have Wanted It is the 122th episode of The Bill

P.C. Melvin is talking to a boy playing truant when he spots an armed robbery. He wrestles with the gunman but is knocked out. D.I. Burnside goes to the funeral of an old school villain, the father of the man suspected of the robbery. A dog digs up the loot. An Irish plumber arrested for being drunk and disorderly offers to unblock the station toilets. After unblocking them, he charges the station a call-out fee.

Retrieved from "https://thebill.fandom.com/wiki/Episode:Mickey_Would_Have_Wanted_It?oldid=34619"
Community content is available under CC-BY-SA unless otherwise noted.