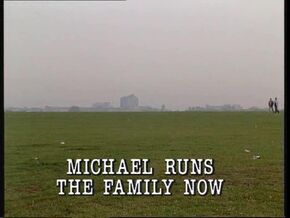 Michael Runs The Family Now is the 197th episode of The Bill.

D.I. Burnside talks to his snout about the robbery of a video shop owned by Michael Lovett, the son of a dead villain who has taken over the family business. An incident at a pub is believed to be retribution for the robbery. The snout's wife is having an affair with Lovett.

A woman, who had been to self-defence classes run by P.C. Stamp, breaks a man's arm. Sgt. Cryer thinks she used excessive force but she tells Stamp she was being molested. The man has form for indecent assaults.

Retrieved from "https://thebill.fandom.com/wiki/Episode:Michael_Runs_The_Family_Now?oldid=34824"
Community content is available under CC-BY-SA unless otherwise noted.