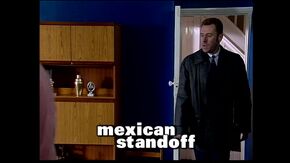 Written By
Candy Denman
Directed By
Baz Taylor
Episode Chronology:
Previous
Out of The Frying Pan
Next
Cruise Control

Mexican Stand-Off is the 1573rd episode of The Bill.

D.S. McAllister pushes her informant and lover Jamie Ross too far when she tapes a privileged conversation between Ross and a client who admits to intimidating a witness in a court case. When Ross makes an official complaint against her, she turns to D.C. Riley for help and threatens to expose his cover-up of his brother's involvement with the French car gang unless he backs her up and says that he was present at all her meetings with Ross.

Retrieved from "https://thebill.fandom.com/wiki/Episode:Mexican_Stand-Off?oldid=36160"
Community content is available under CC-BY-SA unless otherwise noted.