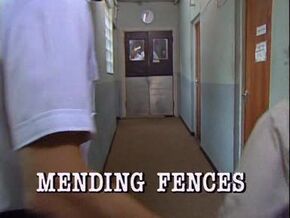 Written By
Julian Jones
Directed By
Niall Leonard
Episode Chronology:
Previous
It's Not Majorca
Next
Exit Lines
Mending Fences is the 157th episode of The Bill

After being raked over the coals by Ch. Supt. Brownlow for the accident in the custody suite, Sgt. Peters mows Mrs Gunn's lawn before taking her to the vicar's fête. P.C. Edwards talks to Thompson Jnr. and the rest of his gang. The gang later vandalises the school. P.C.s Stamp and Hollis give chase into a car scrapyard where a car falls onto Thompson Jnr.

Retrieved from "https://thebill.fandom.com/wiki/Episode:Mending_Fences?oldid=34687"
Community content is available under CC-BY-SA unless otherwise noted.