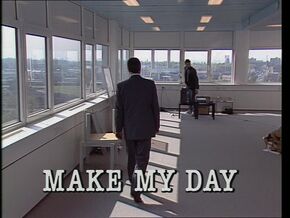 Make My Day is the 134th episode of The Bill.

Uniform are looking for someone who is letting off distress flares inside letterboxes. Melvin arrives on the scene of an attack. The householder wants something done.

Hollis is back on the beat. As he is responding to Melvin's call to assist, he knocks into the rider of a moped who takes off. The Fire Officer tells Cryer the flares could be dangerous because of corrosion. Hollis is swinging around a bag containing a flare gun. The suspect has a thing about Neighbourhood Watch.

An elderly betting shop owner and ex-villain tells Burnside about another elderly villain who has come out of retirement to take out a contract on him. P.C. Turnham goes undercover.

Retrieved from "https://thebill.fandom.com/wiki/Episode:Make_My_Day?oldid=34643"
Community content is available under CC-BY-SA unless otherwise noted.