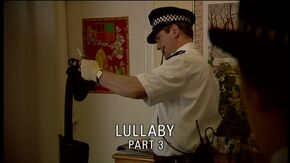 Things are hectic at Sun Hill following Smith's kidnapping. CCTV tapes reveal that he and Tim had been followed from the hospital. Burton has also disappeared following his release from custody. An unidentified motorcyclist arrives at the hospital with a package for Jung - a polaroid photograph of Tim.

Back in custody, Ling denies that Lenny has simply run away with the money and left her behind, and proves it by taking Meadows and Deakin to the lock up where the money is still stashed.

Contact with Area Drugs reveal that the group holding Smith and Tim are likely to be a firm who launder their money through restaurants owned by other people. Meadows is contacted by the kidnappers, who demand that Lenny return their money in person within three hours. It now being clear that Lenny was not taken hostage, Jung is arrested for the murder of her husband

Sun Hill raid the premises associated with the money launderers and though they find the right location, the kidnappers stay hidden and the police leave empty handed. As he and Tim are being led away, Smith struggles with their two captors, allowing Tim to run away. Tim escapes and makes it back to Sun Hill police station.

Jung finally relents and confesses to the location of Lenny's body. Burton is located and Deakin shows him Lenny's corpse, and forces Burton to call the kidnappers, informing them that Lenny is dead. Upon hearing this news, the kidknappers abandon Smithy and flee. Reunited with Smith, Tim tells him that his father had been hitting his mother that night, and that it was him, not his mother, who stabbed his father with a pair of scissors. Too young to be charged, Tim is allowed to leave Sun Hill with his mother.

Retrieved from "https://thebill.fandom.com/wiki/Episode:Lullaby,_Part_3?oldid=35215"
Community content is available under CC-BY-SA unless otherwise noted.