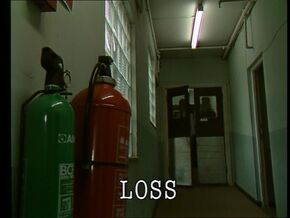 Loss is the 108th episode of The Bill.

Ch. Insp. Conway wants to see P.C. Smith and W.P.C. Martella about a special assignment: going through the missing persons register and following up some of the cases. A cynical Sgt. Penny tells them the initiative is politicially-motivated. A woman who has been harassing her local MP about her missing daughter only wants her back so she can get a three bedroom house. The girl turns up dead. The wife of a missing man who has been onto the Chief Constable is found to have killed herself after seeing his ad in a lonely hearts magazine. Smith is quite excited about his new role, and is hoping to set up a specialised missing persons unit at Sun Hill, but as soon as the politically-sensitive cases are solved, Smith and Martella's unit is disbanded.

Throughout this episode, the characters keep referring to the "Chief Constable", a rank which does not exist in the Metropolitan Police, which has a Commissioner as its most senior officer.

Retrieved from "https://thebill.fandom.com/wiki/Episode:Loss?oldid=34591"
Community content is available under CC-BY-SA unless otherwise noted.