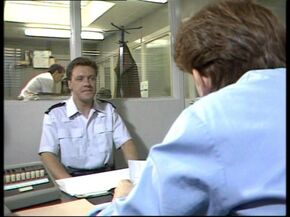 Written By
Geoff McQueen
Produced By
Michael Chapman
Directed By
John Michael Phillips
Episode Chronology:
Previous
Clutching At Straws
Next
It's Not Such A Bad Job After All

Long Odds is the 4th episode of The Bill. PC Litten is in trouble for subverting the chain of command. Using his information DI Galloway moves in on an armed robbery suspect.

P.C. Litten recognises a photo of a wanted armed robber, but takes the information to D.I. Galloway instead of Sgt. Cryer, and gets into trouble with both men. Meanwhile, a gang of thugs is robbing local shopkeepers, and P.C. Edwards purses a mugger into a derelict building and is trapped when the floor collapses beneath him.

Retrieved from "https://thebill.fandom.com/wiki/Episode:Long_Odds?oldid=35916"
Community content is available under CC-BY-SA unless otherwise noted.