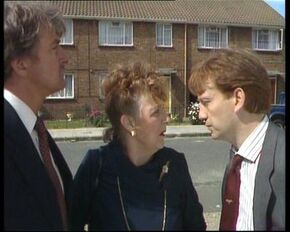 Written By
Tim Aspinall
Produced By
Peter Cregeen
Directed By
John Michael Phillips
Episode Chronology:
Previous
Public and Confidential
Next
With Friends Like That...?

Loan Shark is the 20th episode of The Bill. Fly-dumping, shoplifting and drunken, abusive neighbours: all in day's work for the coppers of Sun Hill Nick.

A young mother caught shoplifting at a supermarket confesses to Sgt Cryer that she is in debt to local loan shark 'Aunty' Peg Miller. PC Edwards checks cases of fly tipping (unauthorised dumping of rubble) in the area and discovers some disaffected Welsh miners may be responsible. A Mrs Taylor makes a complaint about a noisy neighbour, but when WPC Ackland investigates, she finds the neighbour dead.

Retrieved from "https://thebill.fandom.com/wiki/Episode:Loan_Shark?oldid=19791"
Community content is available under CC-BY-SA unless otherwise noted.