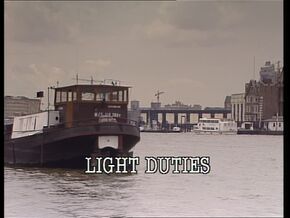 Written By
Geoff McQueen
Produced By
Peter Cregeen
Directed By
Derek Lister
Episode Chronology:
Previous
Not Without Cause
Next
The Three Wise Monkeys

Light Duties is the 36th episode of The Bill.

Recently transferred to CID, D.C. Carver is feeling seasick while he and D.S. Roach work on a case on the police launch. The River Police fish the body of a murdered informant out of the Thames, but Roach is furious when the case is taken over by two detectives from Scotland Yard. P.C. Taffy Edwards and Stamp attend an incident with an unconscious elderly man who has a very protective dog. A woman offers to help, but Stamp tells her to move along. Stamp is horrified when the woman arrives at Sun Hill as the new uniformed Inspector, Christine Frazer. P.C. Hollis is running a sweep on who D.I. Galloway's replacement will be - there are rumours it will be D.I. Burnside. At the hospital, a solid gold krugerrand is found on the old man, and W.P.C. Ackland and D.C. Carver realise the body in the river is the old man's nephew, who was grassing on his accomplices in a krugerrand robbery. Sgt. Penny is back at work on light duties, but he is clearly still deeply affected by his recent shooting.

Retrieved from "https://thebill.fandom.com/wiki/Episode:Light_Duties?oldid=33753"
Community content is available under CC-BY-SA unless otherwise noted.