Start a Wiki
Life and Death 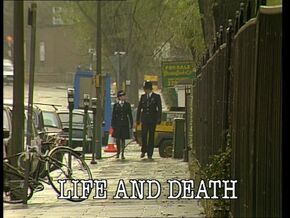 Life and Death is the 89th episode of The Bill.

P.C. Stamp and W.P.C. Brind arrest a man who is so drunk he can barely stand. Back at the station, the man collapses after a drug overdose, but not before implying that he's killed a woman. D.C. Lines and D.C. Carver race to find the man's identity through his dental records and the local jazz clubs, but the man's wife (and his mistress) are found safe and well. P.C. Melvin is sent to inform the wife of a man killed in a factory accident, but he radios in when he suspects that he has told the wrong person. Despite Sgt. Penny's scepticism, P.C. Haynes checks at the factory, finding that it was a similarly-named man who died, and the very-much-alive husband arrives at the station to make a formal complaint.

Retrieved from "https://thebill.fandom.com/wiki/Episode:Life_and_Death?oldid=34528"
Community content is available under CC-BY-SA unless otherwise noted.