Start a Wiki
Lick of Paint 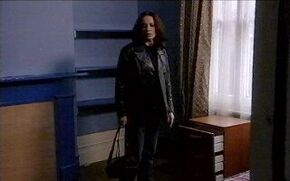 Written By
Geoff Lindsay
Directed By
Ged Maguire
Episode Chronology:
Previous
The Jury's Out
Next
Temptation

"Lick of Paint" is the 1609th episode of The Bill. Hagen finds herself indebted to Boyden after a spate of graffiti-gang scuffles leads Sun Hill to a more dangerous circle of artists.

A spate of graffiti taggings in Sun Hill sees the police showing zero tolerance to the perpetrators. PC Carver is sympathetic towards an alcoholic teacher at Canley Art College when his classroom and students' work are defaced. Sgt. Boyden asks PC Hagen to move in with him, but she is reluctant, wanting her own space. To her outrage, Boyden moves her belongings to his house as a surprise. Boyden arranges for the council to paint a wall blank to set a trap for the graffitists, catching quite a few in the process. The defacement at the art college turns out to have been committed by the teacher who is jealous that one of his students is sleeping with his ex-girlfriend, life model Moira Sutherland.

Retrieved from "https://thebill.fandom.com/wiki/Episode:Lick_of_Paint?oldid=28297"
Community content is available under CC-BY-SA unless otherwise noted.