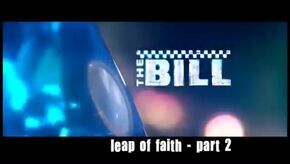 PCs Green and Roberts are called to a domestic disturbance, where they find a woman unconscious. The officers doubt her husband's claims that she fell down the stairs. The daughter is later reported for stealing the takings from her father's boxing club.

Retrieved from "https://thebill.fandom.com/wiki/Episode:Leap_of_Faith_-_Part_2?oldid=34192"
Community content is available under CC-BY-SA unless otherwise noted.