Start a Wiki
Just For The Crack 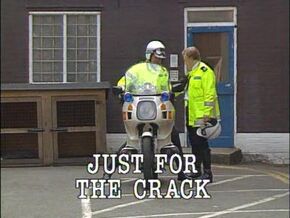 Just For The Crack is the 181st episode of The Bill

D.C. Carver has brought a new suit. Twenty-seven motorcycles, including a police bike, have been stolen. P.C. Garfield and W.P.C. Martella notice two youths stealing a motorbike. When they raid a garage all they find is the licence plate of the stolen police bike. P.C. Able is assigned to deliver a notification of a death. A case that P.C. Melvin spent two weeks on is going to be dropped before going to court. The man involved is going to complain about Melvin, who arrests him for assaulting a police officer.

Retrieved from "https://thebill.fandom.com/wiki/Episode:Just_For_The_Crack?oldid=34738"
Community content is available under CC-BY-SA unless otherwise noted.