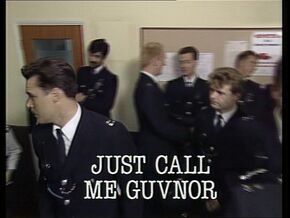 Ch. Insp. Conway briefs the relief on a massive raid about to take place on Frontline, a gang of football thugs. Two police officers are undercover in the gang, and the relief are warned not to show them any signs of recognition, however Acting D.I. Roach and D.C. Carver are stunned when they see D.I. Frank Burnside in handcuffs, blowing his cover. Roach headbutts a suspect who spat at him. The suspect gives his name in custody as "Get Stuffed", and Burnside, who has arrived to take over Sun Hill CID, gives him a slap for his insolence. With no love lost between Sgt. Cryer and Burnside, Cryer threatens to report Burnside if he raises Roach's assault of the same prisoner, but Burnside shocks them all when he reveals that the unfortunate prisoner is the other undercover officer in the gang. Burnside catches up with his old flame, Insp. Frazer who later has a word with Cryer for spreading rumours that Burnside is corrupt. A chastised Cryer swallows his pride and apologises.

Retrieved from "https://thebill.fandom.com/wiki/Episode:Just_Call_Me_Guvnor?oldid=33764"
Community content is available under CC-BY-SA unless otherwise noted.