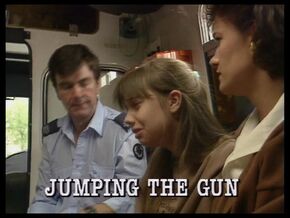 Jumping The Gun is the 241st episode of The Bill

There has been a holdup at a building society. W.D.C. Martella takes a victim to the hospital. Her daughter, witnesed the attack, is in shock. D.C. Dashwood has his identity questioned while door- knocking. The suspect's sister provides him with an alibi.

Retrieved from "https://thebill.fandom.com/wiki/Episode:Jumping_The_Gun?oldid=34755"
Community content is available under CC-BY-SA unless otherwise noted.