Start a Wiki
It's Not Majorca 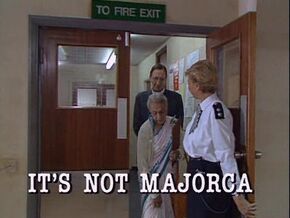 Written By
Julian Jones
Directed By
Niall Leonard
Episode Chronology:
Previous
Nothing But The Truth
Next
Mending Fences
It's Not Majorca is the 156th episode of The Bill.

Two lay visitors are visiting the station. Thirteen prisoners on temporary transfer from Barton Street are about to arrive at Sun Hill. Insp. Frazer volunteers to attend to them while Sgt. Peters takes the lay visitors to the cells. Peters processes a boy who has stolen insects from a pet shop. The lay visitors talk to prisoner Harry Thompson. W.P.C. Brind notices what looks like a foreign policeman in Chief Supt. Brownlow's car. The man attacks her and, in the process of trying to help her, Peters knocks into the female lay visitor, breaking her leg. D.C.s Dashwood and Carver are talked to by Harry Thompson's brother who sprays the undercover van with graffiti with his mates as well as mugging a postman.

Retrieved from "https://thebill.fandom.com/wiki/Episode:It%27s_Not_Majorca?oldid=36016"
Community content is available under CC-BY-SA unless otherwise noted.