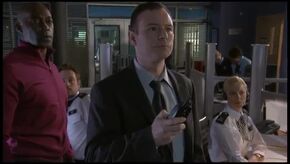 Written By
Steve Bailie
Produced By
Sylvie Boden
Directed By
Paul Wroblewski
Episode Chronology:
Previous
Ultimatum
Next
Solace
Intervention is the 2396th episode of The Bill.

PCs Gayle and Roberts track down the owner of an abandoned car and are advised that he has left the country on business. DS Carter and DC Dasari are suspicious, and soon find out that the man has been kidnapped. DI Manson tells the team about his son's leukaemia. DS Carter pretends to DC Perkins that he has told Manson about his cocaine habit.

Retrieved from "https://thebill.fandom.com/wiki/Episode:Intervention?oldid=34018"
Community content is available under CC-BY-SA unless otherwise noted.