Start a Wiki
In The Cold 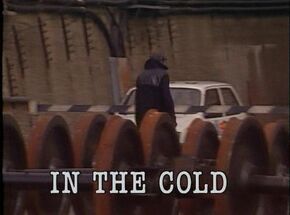 Written By
J.C Wilsher
Directed By
Graham Theakston
Episode Chronology:
Previous
All Part of The Job
Next
Just A Little Run Around
In the Cold is the 169th episode of The Bill.

P.C. Edwards and P.C. Stamp go to a railway yard where a female body has been found. A murder enquiry is launched, and D.I. Burnside thinks the site security man fits the picture. It turns out that the woman has died of exposure.

Retrieved from "https://thebill.fandom.com/wiki/Episode:In_The_Cold?oldid=36075"
Community content is available under CC-BY-SA unless otherwise noted.