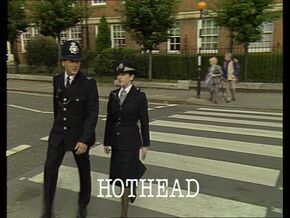 Hothead is the 90th episode of The Bill.

W.P.C. Brind and P.C. Melvin are on foot patrol, but are separated. Brind ends up dealing with a workplace dispute by herself, but the ringleader, Nobby Briggs, smashes her radio and locks her in a storeroom. When Melvin eventually turns up, he calls for assistance and Briggs is arrested. Sgt. Cryer is in a bad mood as he is suffering from a painful toothache, and he yells at a prisoner and pushes him. Lay visitors from the council arrive to inspect the station, and the prisoner accuses Cryer of assaulting him. His cellmate eventually clears Cryer, but he has to cancel his dental appointment when he is called up to Ch. Supt Brownlow's office over the incident.

Retrieved from "https://thebill.fandom.com/wiki/Episode:Hothead?oldid=34530"
Community content is available under CC-BY-SA unless otherwise noted.