Start a Wiki
Homes and Gardens 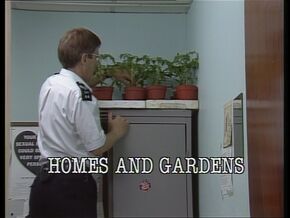 P.C. Yorkie Smith assists P.C. Taffy Edwards dealing with a traffic snarl-up caused by a young man, Mickey Cozens. Mickey's father is called to the station, and he tells the officers that Mickey has a mental age of 7. Smith drives them home, but when Mickey's dad tells his son off, Mickey lashes out and knocks Smith unconscious. His desperate father bundle's Smith into the panda car and drives away. A witness reports that a police officer has been kidnapped, and massive chase takes place until the car is stopped and Yorkie found alive but concussed. A couple come home from holiday to find their entire garden has been removed - trees, lawn and greenhouse. Turns out to be poetic justice as the husband is rumoured to have nicked the plants from the council in the first place.

Retrieved from "https://thebill.fandom.com/wiki/Episode:Homes_and_Gardens?oldid=34327"
Community content is available under CC-BY-SA unless otherwise noted.