Start a Wiki
Home and Away 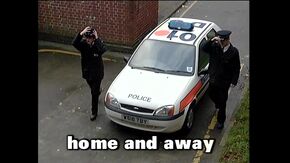 Written By
Mark Holloway
Directed By
Ken Hammam
Episode Chronology:
Previous
Real Crime
Next
Going Under
Home and Away is the 1573 episode of The Bill.

Illicit lovers PCs Page and Quinnan visit a burgled flat where they find the owner, Mrs Hoyle, who is deaf and blind, tied up in the wardrobe. Supt Chandler is outraged when he finds out about the burglary in the local paper rather than from CID. Back at Sun Hill, Page urges Quinnan to tell his wife about their affair. PC Hagen agrees to go to a charity ball with Sgt Boyden. He observes Page and Quinnan coming in together and enquires whether there's anything going on between them: Hagen lies unconvincingly that there isn't. PC Hollis overhears the conversation and news of the affair is soon all over the station. A woman drops a lunchbox into the station for PC Hollis but does not identify herself as his sister. As Hollis has bought two tickets for the ball the relief are intrigued. Accompanied by a newspaper reporter, the police raid the flat of Mick Corcoran, the prime suspect for the burglary. He makes a run for it but is cornered by Page and Quinnan. When he attacks Page with a pipe, Quinnan steps in to defend her but goes berserk, kicking Corcoran so hard that he has to be restrained. Things look bleak for Quinnan when Corcoran starts convulsing. After shift, the limousine breaks down on the way to the ball and the party take refuge in a country pub, where Jenny Quinnan finally works out that her husband is having an affair with PC Page.[1]

Retrieved from "https://thebill.fandom.com/wiki/Episode:Home_and_Away?oldid=35424"
Community content is available under CC-BY-SA unless otherwise noted.