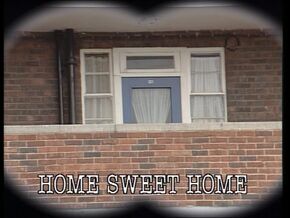 Written By
Nicholas McInerny
Directed By
Gareth Davies
Episode Chronology:
Previous
Good Will Visit
Next
All In Good Faith
Home Sweet Home is the 39th episode of The Bill.

Sgt. Cryer leads a raid to enforce an eviction order on a squat occupied by upper-class kids, watched by Councillor Thomas who is in charge of housing in the area. The raid is successful, but Thomas makes himself scarce as soon as a journalist arrives.

P.C. Smith and P.C. Haynes are called to the local library where a homeless woman, Marie Tucker, and her kids are sheltering. Haynes moves her along by giving her a council housing brochure, but when they are called to a break-in at Councillor Thomas' home, they realise Marie has locked herself in the bathroom.

Insp. Frazer arrives with a social worker who had reported Marie missing and they try to talk her out. When she goes quiet, they break down the door only to find Marie has taken an overdose and died.

Retrieved from "https://thebill.fandom.com/wiki/Episode:Home_Sweet_Home?oldid=33759"
Community content is available under CC-BY-SA unless otherwise noted.