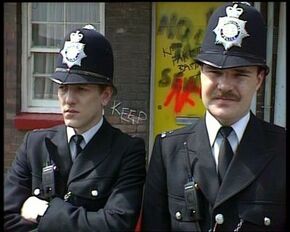 Home Beat is the 15th episode of The Bill. Petty crime and racial attacks; can a community police itself or will it always need men like Cryer's to do the dirty work.

Brownlow wants to start a Neighbourhood watch scheme with the support of Smith and Carver. After a rather heated meeting that got hijacked by interlopers, he discovers his petrol was nicked. The Ahmeds are having problems as racist language has been graffitied upon their house, soon after a protest erupts and their house is later firebombed. CID raid a modern day 'Fagin' who has been using a youth group as cover.

Retrieved from "https://thebill.fandom.com/wiki/Episode:Home_Beat?oldid=19771"
Community content is available under CC-BY-SA unless otherwise noted.