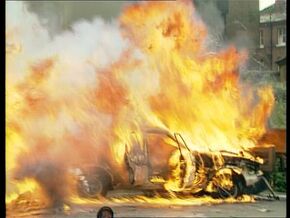 P.C. Smith and P.C. Melvin are first on the scene of a traffic accident. The cars are on fire, and both officers risk their lives to rescue the occupants. One of the cars explodes, killing a passenger, knocking Smith unconscious and burning Melvin's hands. One of the men they rescued is a big-time villain, and the F.I.O. (Fire Investigations Officer) reckons he had explosives in the boot. D.C. Carver and W.P.C. Martella stake out a pub, but get distracted playing video games. They eventually follow and arrest a man who is ripping off his employer. D.S. Roach attends the Met's firearms training for renewal of his firearms authorisation. He fails spectacularly and his licence is revoked, but it's clear he failed deliberately. At the hospital, Martella arrives to help Melvin keep an eye on their suspect, but they are distracted when a man high on drugs runs through the ward, and their villain disappears.

D.S. Ted Roach deliberately fails his firearms course, and his "pink card" as an Authorised Firearms Officer is revoked.

Retrieved from "https://thebill.fandom.com/wiki/Episode:Hold_Fire?oldid=34335"
Community content is available under CC-BY-SA unless otherwise noted.