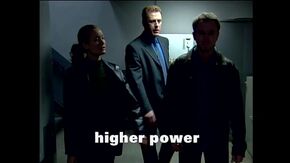 Higher Power is the 1578th episode of The Bill.

P.C. Carver attends to a drug dealer found badly beaten on the Larkmead Estate, but finds himself in a dilemma when a friend Ossie from his AA group confesses to the crime. D.S. McAllister follows Carver when he tries to convince his friend to turn himself in, and to his horror, Ossie is arrested shortly after. Carver realises that Ossie had suffered an alcoholic blackout at the time, and that the real beating was committed by a rival drug dealer on the Larkmead. Meanwhile, Uniform contend with the BIC gang, a group of youths harassing local shopkeepers.

Retrieved from "https://thebill.fandom.com/wiki/Episode:Higher_Power?oldid=36181"
Community content is available under CC-BY-SA unless otherwise noted.