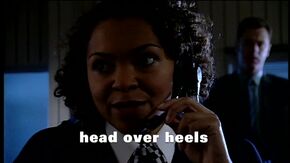 Head Over Heels is the 1592nd episode of The Bill.

P.C. Stamp joins a dating agency for professional people, telling them he is an antiques dealer, and as he is living in the section house, gives them P.C. Page's address, but without asking her first. A CID operation involving forged banknotes goes wrong, and Sgt. Gilmore tells Stamp and P.C. Hayward off when they pursue and arrest an armed suspect without backup. D.C. Webb and D.C. Spears investigate a series of burglaries and discover a link to Stamp's dating agency. Stamp's date Lisa invites men to stay at her flat and then arranges for their houses to be burgled. CID set up surveillance outside Page's house, and catch the thieves, and Stamp must sadly arrest Lisa.

Retrieved from "https://thebill.fandom.com/wiki/Episode:Head_Over_Heels?oldid=35618"
Community content is available under CC-BY-SA unless otherwise noted.