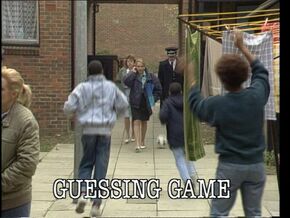 Written By
P. J. Hammond
Directed By
Jan Sargent
Episode Chronology:
Previous
Tigers
Next
The Assassins
Guessing Game is the 79th episode of The Bill.

Neighbours report an elderly man hasn't been seen for a couple of days, and P.C. Ramsey breaks into the house to find the man dead on the floor. A doctor confirms he died of natural causes. As W.P.C. Ackland checks the house, she is suspiscious of the pictures on the wall and some woman's belongings in a shoe box. It appears the man had a fetish for restraining women against their will, and a CRO check reveals that he had form for such crimes dating back for decades. The belongings found in the house are quite recent, and D.S. Roach begins to suspect that he may have captured another victim before he died. Roach, D.C. Dashwood and D.C. Carver investigate further and eventually locate another flat belonging to the man, but no sign of a victim. They realise that the neighbour who reported him missing was his intended target, but Roach decides not to tell her about how close she came to danger.

Retrieved from "https://thebill.fandom.com/wiki/Episode:Guessing_Game?oldid=34309"
Community content is available under CC-BY-SA unless otherwise noted.