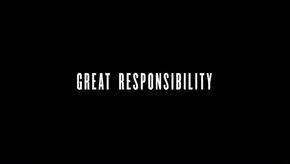 Great Responsibility is the 2388th episode of The Bill.

Supt Meadows has to deal with criticism that poor crowd control measures led to the riot following the football match. Commander Kennedy's son is placed at the scene of the stabbing.

Retrieved from "https://thebill.fandom.com/wiki/Episode:Great_Responsibility?oldid=34002"
Community content is available under CC-BY-SA unless otherwise noted.