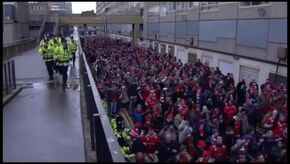 Written By
David Lawrence
Produced By
James Hall
Directed By
Alex Pillai
Episode Chronology:
Previous
The Truth Will Out
Next
Great Responsibility

Great Power is the 2387th episode of The Bill.

Supt Meadows is overseeing crowd control at a football match but Commander Kennedy becomes concerned when one group of fans is shepherded into a confined area. The situation on the ground soon escalates.

Retrieved from "https://thebill.fandom.com/wiki/Episode:Great_Power?oldid=33999"
Community content is available under CC-BY-SA unless otherwise noted.