Start a Wiki
Got You Wrong 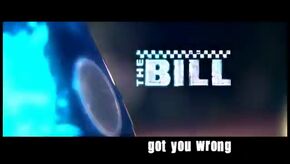 Written By
Olly Perkin
Produced By
James Hall
Directed By
Indra Bhose
Episode Chronology:
Previous
Deal Me Out
Next
Back To School

Got You Wrong is the 2327th episode of The Bill.

Sgt Stone, called to the scene of a reported theft, realises that the suspect is the victim of domestic violence. She alerts Stone to a meeting between her husband and his criminal associates, so TDC Fletcher and DS Carter mount a surveillance operation.

Retrieved from "https://thebill.fandom.com/wiki/Episode:Got_You_Wrong?oldid=34200"
Community content is available under CC-BY-SA unless otherwise noted.