Start a Wiki
Good Will Visit 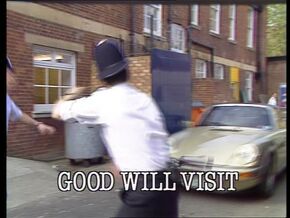 Good Will Visit is the 38th episode of The Bill.

P.C. Ramsey arrives as Sun Hill, nearly running P.C. Edwards over with his Porsche and parking it in the Chief Super's space. He has been transferred from Barton Street CID for cheating at cards, and has been put back into uniform. Ramsey gets a warning from Ch. Insp. Conway to keep his nose clean, but he is clearly still up to his old tricks: taking a bribe from a street hawker and generally winding up his fellow officers.

Sgt. Peters and P.C. Haynes go to the Royal Navy to arrest a group of sailors who trashed a nightclub, much to the annoyance of Conway and the Ministry of Defence, but have to let the sailors go as they are due on an important naval exercise.

D.C. Carver and D.C. Dashwood watch and arrest two Chinese men with a van full of an unidentifiable substance which they suspect may be drugs. Ramsey identifies it as the expensive spice saffron, stolen from a warehouse the previous month. Ramsey takes his car to be repaired at a garage owned by a friend of Sgt. Cryer's, but takes it back without paying after finding it on the street, and Cryer is furious when he finds out.

Retrieved from "https://thebill.fandom.com/wiki/Episode:Good_Will_Visit?oldid=33757"
Community content is available under CC-BY-SA unless otherwise noted.