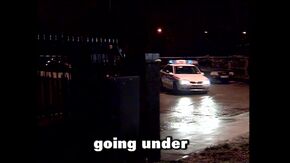 Written By
Richard Stoneman
Directed By
Ken Hannam
Episode Chronology:
Previous
Home and Away
Next
Faultline

Going Under is the 1574 episode of The Bill

PC Quinnan arrives late after rowing with wife Jenny all night. Ever the troublemaker, Sgt Boyden sends him out on patrol with PC Stamp, and pairing PCs Page and Hagen. Quinnan and Page have trouble keeping their mind on the job, and this gets dangerous when Stamp is attacked by a gang of thugs on the Docklands Light Railway and Quinnan is nowhere to be seen. When Jenny leaves him and returns to Dublin, Dave starts to crack up. He puts on his uniform after his shift and goes on a vigilante mission to find the gang responsible for the attack on Stamp. DC Webb gets an anonymous call and finds some of the gang members tied up and sprayed with pepper spray.

This episode features a new title sequence and a new arrangement of the theme music.