Start a Wiki
Getting Stressed 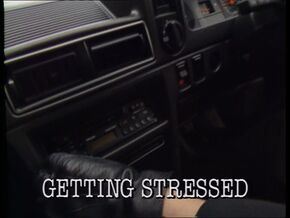 Written By
Christopher Russell
Directed By
Philip Casson
Episode Chronology:
Previous
An Old-Fashioned Term
Next
Tigers
Getting Stressed is the 77th episode of The Bill.

Insp. Frazer is driving to work when she witnesses an accident. She rescues a man from a burning car, but he is less than grateful when he learns she is a police officer.

Back at the station, P.C. Hollis is bothering everybody with a survey about stress. P.C. Ramsey deals with a rape victim. An elderly lady helps D.C. Dashwood with information about muggers using motorbikes, so D.I. Burnside sets up an operation with the traffic police to catch them. W.P.C. Ackland brings in a woman for being drunk in charge of a baby. D.S. Roach is told to end the relationship he has with Frazer.

Retrieved from "https://thebill.fandom.com/wiki/Episode:Getting_Stressed?oldid=34305"
Community content is available under CC-BY-SA unless otherwise noted.