Start a Wiki
Getting It Right 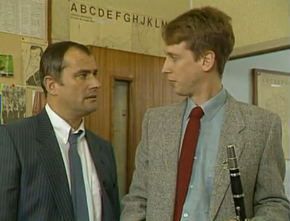 D.S. Greig starts off on the wrong foot with D.I. Burnside

Written By
Barry Appleton
Produced By
Michael Ferguson
Directed By
Terry Daw
Episode Chronology:
Previous
Taken Into Consideration
Next
A Reflection of Glory

D.I. Burnside leads a raid on a hotel room to catch a man suspected of armed abduction, but due to PC Ramsey's duff info, they raid the wrong room. The man in the room threatens to make an official complaint against Burnside, who charges Ramsey with digging up some dirt on him. It turns out he's a doctor, and it appears he was having an affair with a patient. Burnside gleefully goes to tell the doctor to drop his complaint, but finds he and Ramsey got it all wrong again. Sgt. Cryer is heading to court to support his son, Patrick, and on the way he is followed by a girl who tells her that Bob found her as an abandoned baby 15 years ago. Patrick's case is thrown out of court, and the dead girl's father accuses Cryer of a police cover-up. In no mood to deal with her, Cryer tells Bobby to go away, but back at the station sees she has been reported as missing.

Retrieved from "https://thebill.fandom.com/wiki/Episode:Getting_It_Right?oldid=22484"
Community content is available under CC-BY-SA unless otherwise noted.