The Bill Wiki
Register
Don't have an account?
Sign In
Advertisement
in: 1984 Episodes, Series 1, Series 1 Episodes,
and 3 more 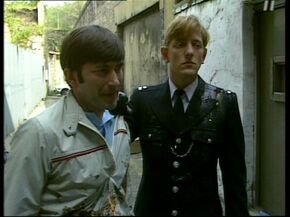 "Funny Ol' Business - Cops & Robbers" is the first episode of The Bill. Car crime is on the rise and PCs Carver and Edwards manage to arrest a suspected car thief.

Sgt Bob Cryer drives to the station listening to the dulcet tones of Bill Reynolds on BBC Radio 2 at 5.35am. Despite the early hours, life at Sun Hill is in full swing and Bob is surprised to see the FME accompanying a stretcher out of the station on the way to the hospital, learning that a prisoner had an epileptic fit in his cell. Venturing further in into the station, Duty Sergeant Alec Peters is happy to hand over control to Bob, explaining that it had been busy all night – and that the FME had made a mistake about the prisoner, declaring him just drunk.

In the canteen, WPC June Ackland and PC Jim Carver are disappointed to hear the National Front have been given the go ahead for their march, meaning that all leave is cancelled for the weekend. In Chief Supt. Charles Brownlow's office the Sergeants are planning the route and how best to police it whilst keeping the relief safe and away from marbles and other missiles.

DI Roy Galloway joins a uniform briefing to update them on the operation that has been running for the past month regarding breaking and entering, a particular trend being homes that have recently been double glazed. He wants to know immediately if anything with an even remotely similar MO is called in.

Chasing a youth who'd been attempting to break into a car, Jim is not amused to end up covered in spaghetti after barging into a waitress. At the station the suspect refuses to even give his name without talking to someone from CID. Bored of waiting, Sgt. Tom Penny leads him to the cells, leaving Taffy and Jim to have a water fight in the men's toilets whilst getting changed.

PC Dave Litten is stopped whilst on foot patrol by a lady who has been broken into. Calling it into the station, the news is passed onto Roy who surprises Bob with a thank you and calls in a Mr Langley from a double glazing company to run through what happens during the average day at his business. Learning that the keys to the double glazed doors are sellotaped to each one to ‘avoid mixup’, Roy deduces that the dishonest fitters are getting an extra key cut before fitting the windows and doors.

Picked up by the van, Jim and Taffy are taken to the High Street to meet WPC Viv Martella and June to search for a group of persistent pickpockets. Brownlow is particularly keen to see them arrested and asks Bob to keep him up to date. June asks Taffy and Jim to take one of the victims with them to look for the group and she and Viv take the other.

Bob is riled by a visit from DS Tommy Burnside who insists he'll wait for Roy in his office, the two obviously have history and Bob regards him as bent. Roy arrives back at the station with the suspects from the double glazing burglaries and leaves Dave and Tom to book them in whilst he goes to see Tommy, learning that the suspect Jim arrested that morning was a snout. Bob is adamant that he doesn't want the suspect to walk, but after listening to Tommy's sob story, Roy agrees to help him and calls in a favour that he did for Bob, sanctioning his release for a couple of days despite Bob's protests.

Tom and Bob are surprised when a Mr Skene brings in a man he has apprehended after an attempted pick pocket incident, just as the relief return from the High Street empty handed. Mr Skene had sewn fishhooks to the inside of his pocket and the suspect had ripped his fingers open whilst attempting to steal the wallet.

The FME, John, returns to look at the suspect's hand and talks to Brownlow who tries to cheer him up, confessing that a woman had died from his ‘inactions’, several years ago. He agrees that it's a hard job and tries to explain that it's impossible not to mess up once in a while, but John will hear none of it and is fixated on being responsible for a man's death.

Discovering that his first arrest is about to walk out the station, Jim tries to appeal though is silenced upon realising that the release was organised by Roy. Once outside, Tommy lays into his suspect and finally gets him to shut up and warns him to keep his mouth shut or he'll put it around that he was arrested by a probationer and ruin his ‘reputation’. Seeing Jim and Taffy as they drive past, the snout sticks two fingers up and riles him, winding Jim up further.