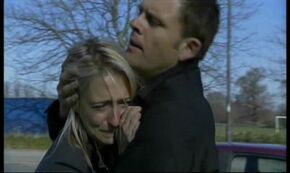 Part of the Frontline series. Uniform are briefed about Emma's death. Sally can only cry as she arrests the main suspect. Kezia sets off a bomb, but it turns out to be a fake. Stone and Smithy fight in the middle of the station. SO15's DI Lacy joins CID for the investigation.

Retrieved from "https://thebill.fandom.com/wiki/Episode:Frontline:_Aftershock?oldid=34969"
Community content is available under CC-BY-SA unless otherwise noted.