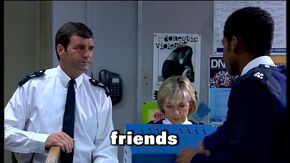 Written By
Candy Denman
Directed By
Gwennan Sage
Episode Chronology:
Previous
Two Way Burn
Next
Bad For Your Health Part One
Friends is the 1556th episode of The Bill

A raid on a brothel uncovers several illegal immigrants from Croatia forced to work as protitutes. The owner of the premises, Carson agrees to reveal who is bringing these girls into England and the brothels, a person called Luca in exchange for a lesser charge but on the way to court, the police van is ambushed and Carson kidnapped. After the car used in the ambush is found with blood stained seats, it is suspected Carson has been killed. Carson's lawyer, Doyle eventually agrees to set up a meeting with Luca and Sgt. Boyden sets up a surveillance operation on a locker. A female who ran away during the police raid on the brothel called Lutza collects the money and it turns out she is in fact Luca as well and responsible for setting up the agency that sends Croatian women to England. Afterwards, PC Gary McCann receives the good news that he has passed his Sergeant's exam and is leaving Sun Hill to take up his new rank.

Retrieved from "https://thebill.fandom.com/wiki/Episode:Friends?oldid=35307"
Community content is available under CC-BY-SA unless otherwise noted.