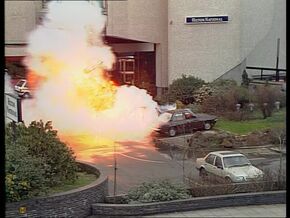 Written By
P. J. Hammond
Directed By
Alan Wareing
Episode Chronology:
Previous
Out To Lunch
Next
Only A Bit of Thieving

Free Wheel is the 117th episode of The Bill.

CID are keeping an eye on a man who is suspected of the illegal shipment of arms to Third World countries. No one has been able to make a case against him in eight years. A package gets delivered that could be for the suspect.

Meanwhile P.C. Smith tries to explain to a couple that the chances of recovering their stolen vehicle are remote, but that he has no objection to them looking for it themselves.

A car is parked in the hotel car park overnight and it turns out to be the missing car that Smith is dealing with. It explodes when the ignition key is turned.

Retrieved from "https://thebill.fandom.com/wiki/Episode:Free_Wheel?oldid=34609"
Community content is available under CC-BY-SA unless otherwise noted.