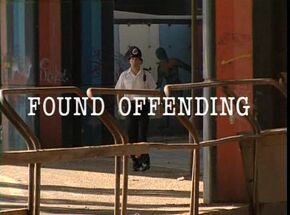 Written By
John Kershaw
Directed By
Eva Kolouchova
Episode Chronology:
Previous
The One That Got Away
Next
All Part of The Job
Found Offending is the 167th episode of The Bill.

P.C. Stamp is near an underpass when he spots a teenage couple begging. The lad sees him and runs off, leaving the girl behind. Stamp brings her in to the station where it turns out that she was abused by her father. A lady outside a café is worried about a café worker being terrorised by workmen from a building site. P.C. Edwards is called to deal. P.C. Hollis goes to see a man whose neighbour is trying to knock down a new fence.

Retrieved from "https://thebill.fandom.com/wiki/Episode:Found_Offending?oldid=34710"
Community content is available under CC-BY-SA unless otherwise noted.