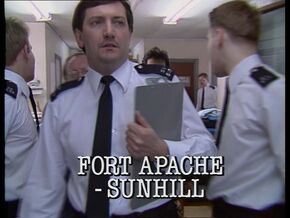 Written By
Barry Appleton
Directed By
Atonia Brid
Episode Chronology:
Previous
You'll Be Back
Next
Waste

Fort Apache - Sun Hill is the 125th episode of The Bill

An industrial dispute by prison officers puts pressure on the holding cells. D.S. Roach is not happy that a murder suspect is mixing with other prisoners. The prisoners in one of the cells are caught smoking cannabis smuggled in in a cup of coffee. A prisoner in another cell alleges rape. The murder suspect punches Roach and ties him up, then tries to make his escape. P.C. Melvin admits a chief superintendent from the Yard who has called to check the books and the collator's office, upsetting P.C. Hollis in the process. The superintendent turns out to be a fake and is there to free Roach's suspect. P.C.s Ramsey and Smith are watching two suspects who change their car. Smith doesn't think they can handle it on their own but Ramsey does. The two are involved in the smuggling of peregrine falcon eggs.

Retrieved from "https://thebill.fandom.com/wiki/Episode:Fort_Apache_-_Sun_Hill?oldid=34625"
Community content is available under CC-BY-SA unless otherwise noted.