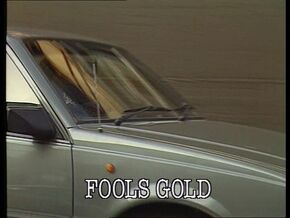 Written By
David Squire
Directed By
Keith Washington
Episode Chronology:
Previous
No Strings
Next
The Visit

Fool's Gold is the 112th episode of The Bill.

D.C. Carver, P.C. Smith and P.C. Ramsey bring in a suspect with a sawn-off shotgun. The suspect is implicated in several Post Office robberies and cuts a deal with D.I. Burnside. A D.I. from Serious Crime comes to talk to the suspect.

W.P.C. Martella brings in a boy who has been shoplifting condoms. His mother has been missing for three days.

Billy Murray, who plays D.I. Jackman from the Serious Crime Squad, would later join the cast as D.S. Don Beech.

Retrieved from "https://thebill.fandom.com/wiki/Episode:Fool%27s_Gold?oldid=34599"
Community content is available under CC-BY-SA unless otherwise noted.